Once again the role of omega-3s in health is being called into question, this time in relation to cognitive decline…and once again I feel compelled to try to remind people that we need to look at the overall body of science before drawing conclusions based on a single study. As many scientists have noted, no single study is perfect…so no definitive conclusions can be drawn from a single study. Yet, this is exactly what is happening in the consumer media in response to a new paper from Chew et al on the role of omega-3s and other nutrients in cognitive decline. The results of the study led the authors to conclude, "Contrary to popular belief, we didn't see any benefit of omega-3 supplements for stopping cognitive decline." Newsweek went so far as to translate this into the declaration, “Omega-3 Supplements Are a Waste of Money.” Really, Newsweek? A single study, on a single area of health, means better nutrition is a waste of money? Would they at least change their view if the totality of evidence for that health condition told a different story?

The paper by Chew et al focused on cognitive function though, so let’s look specifically at this area of research. EPA and DHA are both long-chain omega-3s, but they are actually each thought to play different roles in the body, but especially in the neurological system. DHA is the most prominent fatty acid found in the neurological system and is actually part of the structure of your brain and eyes. One hypothesis is that DHA is really required in sufficient amounts to see effects in cognitive function studies. In fact, one paper has shown that DHA consumption leads to greater blood flow and activity in the prefrontal cortex during cognitive tests than EPA, which indicates that DHA is the key player. Another paper, a recent meta-analysis of randomized, controlled trials by Yurko-Mauro et al, showed that greater than 1g of DHA per day was required to improve some aspects of cognitive function in older adults.

This is important because the media reporting on the paper by Chew et al is that “high dose” omega-3s did not slow the rate of cognitive decline in this population, but the supplement that was given to this group only contained 350mg of DHA. One could argue that this is hardly a high dose of DHA since it is less than you would get from a single serving of salmon, but the real question is whether the dose is sufficient for detecting a benefit.

I went to the scientific literature and pulled out all of the papers studying the effects of omega-3s on cognitive function in adults ranging from healthy individuals to having mild Alzheimer’s disease. I excluded studies with subjects that had full-blown Alzheimer’s disease because Chew et al were not trying to see if omega-3s could reverse that horrible disease, they were only trying to establish whether omega-3s played a role in preventing cognitive decline. I also excluded two small studies with phospholipid omega-3s because there are questions about whether that changes the absorption of EPA and DHA, meaning the doses would not be comparable to the other studies…both found benefits at very low dosages though. Next, I looked at the primary outcomes for each paper, the DHA dosages in each study, and whether the authors concluded that there was a beneficial effect in their studies for those incomes. You can download a table of these papers here. The results are pretty clear-cut, as the chart below shows. If a study does not include a significant amount of DHA, it is not likely to show a benefit, but that does not mean that DHA at any dosage is not beneficial. 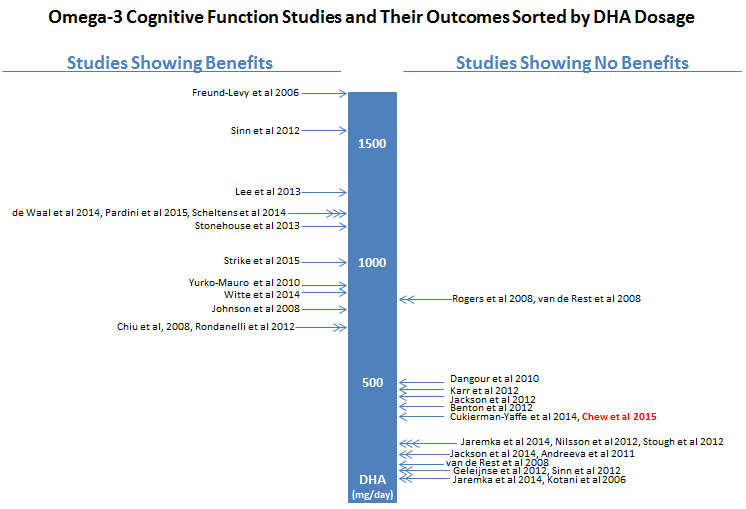 So why did Dr. Chew and her colleagues use such a low dose of DHA, when literature suggests a higher dose is needed? Well, when the design of their study was completed in early 2006, none of this data existed. All of the clinical trials published in this area came out in 2006 or later. Dr. Chew and her fellow authors noted in their paper that the dosage could be one of the factors that affected their findings, and while this point made it into many stories in the consumer press, the importance of this point was nowhere to be found in the headlines.